Through a glitch in the flow of time, 2019 is already half over. What have I been up to? A mix of cosmic horror, Martian exploration, preternaturally evil dating apps, and late-stage capitalist elves.

I spent many months writing for Moons of Madness, a moody horror video game set on Mars. Think of it as an unholy marriage of Cthulhu Mythos and The Martian. The game is developed by Rock Pocket Games and published by Funcom. It takes place in its own special corner of The Secret World universe.

One of the more unique writing projects I’ve worked on was this ARG (alternate reality game). I teamed up with Paradox Interactive and Alice & Smith, writing everything from text for a sinister dating app, to fake conspiracy theory articles, to internet influencer Twitter posts. All of this took players through online mysteries (as well as clandestine encounters in the real world), leading up to a live event in San Francisco. The entire caper served as a transmedia guerrilla marketing campaign for the announcement of Vampire the Masquerade: Bloodlines 2. What is an ARG? What does it all mean? Nick Nocturne breaks it all down with a deep dive over at Night Mind (including an interview with me).

My work with Vampire: The Masquerade continued with Chicago Folios, a stretch goal for Chicago by Night (5th edition). I got to work with a setting and characters I first discovered as a teenager (bringing my inner goth geek full circle).

I’m a longtime listener of The Drabblecast, so getting one of my stories recorded there was on my bucket list. My story “The 500 Days of Ms. Between” can be found on their premium B-Sides show. It’s a Cthulhu Mythos tale and my first time travel story.

I’ve been itching to do some live-play online tabletop gaming and finally got my chance. This game was set in the delightful world of Pugmire, to promote their upcoming Pirates of Pugmire book. Follow the links to watch Part 1 and Part 2 of the play session.

I wrote up some twisted characters for an upcoming game by Avalon LARP Studio. Midwinter is a LARP (live action roleplaying game) with a dark holiday theme, featuring elves as late-stage capitalist slaves to a mysterious workshop. Here there be candy canes, lost souls, and stolen memories. Ho. Ho. Ho.

I attended this year’s ECGC as a speaker, giving a talk about the branching trunk of a story arc in interactive media like video games.

I wrote a little something for iLLOGIKA Studios for an upcoming game project of theirs… and I can’t say much more than that.

Anyway, it’s been an interesting year. The best is yet to come, sweetlings.

Some gourds got more reason to grin than others.

I’m a portrait! Look, look! The wonderfully phantasmagoric-minded Mel Addams made this for me. You can read their  story why here.

I’ll break the image down, because I want to illustrate just how much thought and effort went into this. Mel saw that I had some lovely paintings of both Poe and Lovecraft on my wall, by Michael Bielaczyc.

I once talked about the notion of Impostor Syndrome, the insidious doubt that you don’t belong or that some success was not really earned, and how that can pop into anyone’s head, from beginning to novice to the most successful. Mel, in their glorious and kind wisdom, thought a good safeguard would be for me to look up and see my face with a couple of my heroes. They put my face to the same stylized tilt as the Bielaczyc paintings. And they pieced me together from bits of things I’ve provided online over the years.

Years ago, I played around with photo shop to make this image of me.

The one-eyed cat on the left, in the portrait, is my actual one-eyed cat, Raven. I adopted her in Montreal and she has been my home scrivnomancy familiar ever since.

The served hand on the right, is my workplace familiar. I picked it up one Halloween, when I lived in Oslo. It’s been my office mascot ever since (in three countries). And was once a regular character feature on my twitter.

And finally the top hat. It’s actually my leather top hat, purchased from a vendor, many GenCons ago. The eyeball patch I got from Grichels. The hat has taken on a life of its own. Players and readers have gotten to know me by the image. It’s featured in the live twitch dev-stream I do for The Secret World, called The Streaming Ones.

The hat has even taken on surreal digital life within The Secret World game itself. Behold, Nyarlatophat!

Also featured are a coat and vest of mine.

And there you have it. The gift Mel gave me, besides their amazing talent, was an image that I unknowingly got to collaborate on making (by taking pieces of me). That’s a swell gift to someone who likes composing visual things (but with no real technical skill for it). It means the fiddling I did with photoshop or the eyeball I had attached to a hat, and the paraphernalia I surround myself in, all contribute to a sweet image. THANKS, MEL!

If you happen to want a print of the portrait, you can contact Mel Addams to order.

So the romantic weekend is concluded. Chocolates have been eaten. Flowers passed. Cards. Perfume. Heart-shaped everything.

Now you want some unorthodox romance. Some strange love. Valentines that beat. Look no further!

Tonight, I am sequestered in my writing space. This is a quick tour…

See that empty space between the Maltese Falcon and the Cthulhu idol? That’s where I want to live. 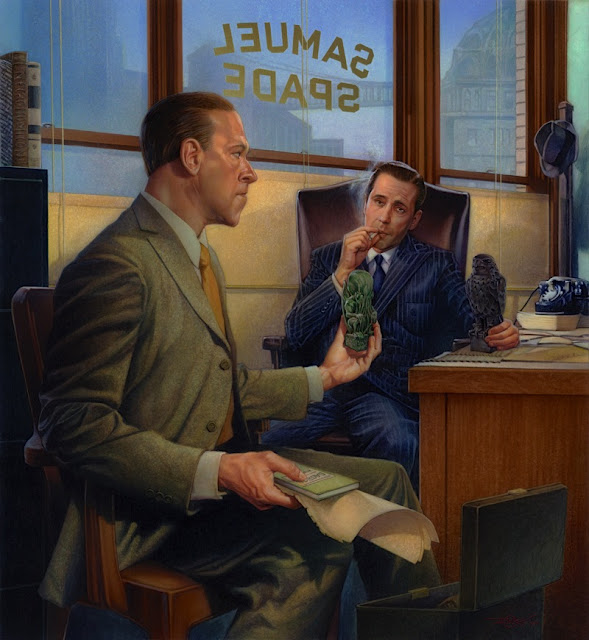