It’s about time Martine Svanevik’s book got out there. Go vote #56. It’s like investing in good future fiction for no money. A steal! Encouragement, at the right intersections in life, does some amazing things.

Last post, I scrivened on about one of my favorite places to take a midnight walk in Montreal: Westmount Park. There the trees are tombstones. It’s also a really nice park of winding paths.

Then I thought the heavy thoughts again.

I said to myself, “Self, you need to occupy your mind with something else for a little while.”

I looked over and noticed more of those trees, the ones with the metal plaques with names and dedications, the ones that turned the trees into weird tombstones — trees I hadn’t visited on my previous walks. For some reason, I find the dead names and words on the trees interesting, so I got up for a look and a diversion.

I shit you not and hope to die. 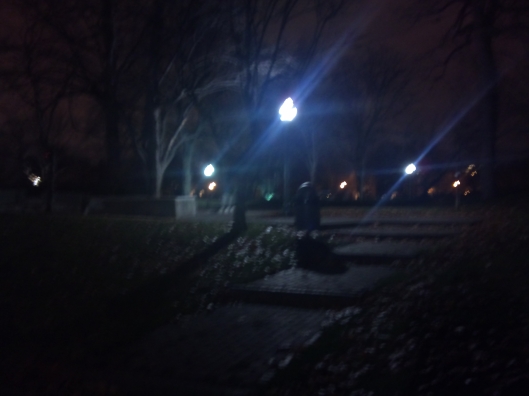 I like late night walks. In Montreal, one of my favorite spots is Westmount Park. Already a nice place, midnight turns it into a new dimension, with its winding brick walkways, black iron, and empty playground–it’s all autumnal shades. “Creak-clink” says a chain swing in the wind. Places like that become yours after the witching hour.

It’s about this time that the lights take on strange properties, panting trees in ghost plasma. Living downtown, I’ve found exposure to trees to be a little more important, a little less for granted, a little more communionesque. But trees are not always trees… 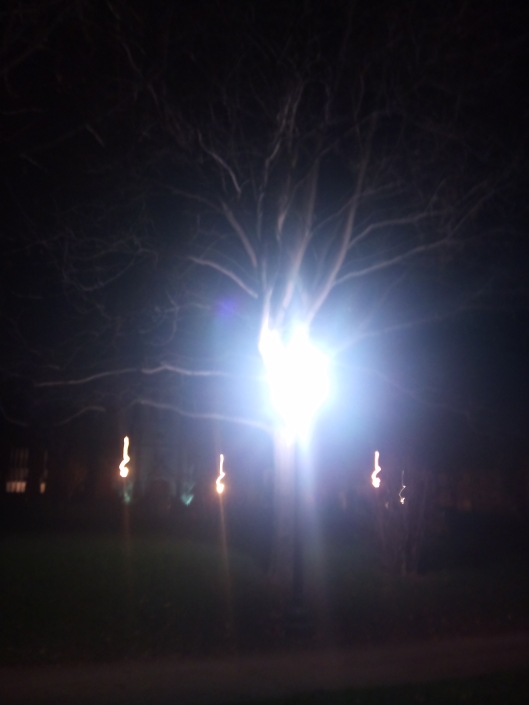 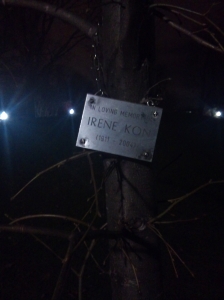 I took a closer look, and some of the trees had dedications on them, to people who had passed. Suddenly the place took on graveyard connotations. Sepulchral trees. Not just a favorite haunt, but a haunt. Tombstones that shed leaves. Just me, the empty swings, and arboreal spirits. Do loved ones visit the trees? Do they visit in the day, or creep about at night like me? Do other people read each and every plague? What was Irene Kon’s least favorite color? Was Sally Gagnon looking forward to the change of the millennium? What kind of tree would I want to have my name on?

How does that line go? By myself but not alone.

Nights keep coming, and I’ll keep walking. I’ll visit Irene, Sally, and the rest. Someone told me it’d be healthier to get up in the morning and do my walks then. But I like the skewed view of midnight. I don’t think that’s a bad vice, as far as vices go. 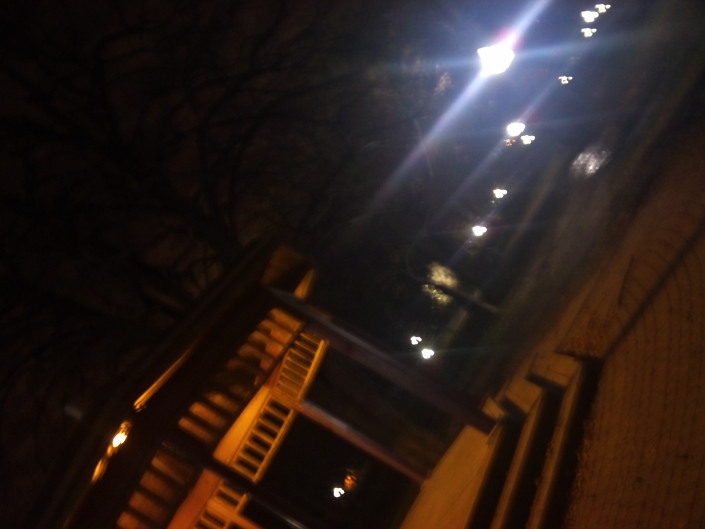 Hug a tree and it might turn into a tombstone. But then we live in a world where rocks might be rock lobsters. I wonder what the tombstones actually are…

Oh…and if you’re going to be up late, you should be listening to The Tailor.

I wholeheartedly apologize for my absence of near on five months. I was sidetracked while thwarting a nefarious scheme of world-domination by a dimensional hopping race of hyper evolved foot-fungi, with the help of a most unlikely companion: a talking, homicidal salamander named Dr. Skallymagtanomous. I would have been here sooner, but he insisted I accompany him on further adventures across the omni-verse, and…well, he has a laser scalpel. Sorry I’ve been away. But now I’m back!

P.S. Unless, of course, the good, scalpel-wielding doctor has a penchant for wearing other people’s faces, and I never did come back.

I’m back and in the process of building up my brand new blog (smell that new blog smell) over here at: https://joshuadoetsch.wordpress.com/ having uploaded about 8 years of bast blogage.

If you are reading this at another blog, worry not, there is a good chance that shouldn’t change and I’ll find a way to forward posts there via client, cut ’n paste, messenger pigeon, or by carving it with my laser scalpel upon the flesh of those who cross me. But…if I’m absent again from here (wherever that is), then go to the above link.

Now…the last five months could use a lot of elaboration. There have been multiple continents, projects, and alcoholic beverages made out of distilled metaphors. But there is no time! Inigo, what should we do?

Right. So last we left off, I was still in Norway, a year into my gig writing video game dialogue for Funcom. I was getting ready to hop countries, again, this time to Montreal, Canada, to write at Funcom’s new studio there. But there were things to do before leaving Scandinavia. One was to go with Oliver, a British buddy from work, and take a backpacking week through the Norwegian Fjords. This deserves its own post (and perhaps it will get one), but for now, let us say it involved rescuing a caterpillar; drinking in a meed hall; having a Nordic epic about brown cheese read to us by an Icelander and a Norwegian; a terrifying man pointing at us, in the cemetery, and shouting, “Mr. Inbetween!”; and seeing lots of scenery like this:

Before reaching Montreal, I took a month of vacation at home, and made a mad dash to see as many of those I missed as I possibly could. I went to Island Lake, to Chicago, to Milwaukee, to Springfield, to Indianapolis, and other places besides. I also visited GenCon 2010 to get a nice injection of my gamer roots. So much to tell here…but time is short…and my new face itches!

But perhaps I could take a moment to elaborate on…

I moved to Montreal. Much to say. But there is no time! Let me hit some random highlights. I got an apartment and I adopted a one-eyed black cat named Raven.

At a party, a girl from work mixed metaphor drinks. That is to say, there was a large and varied supply of drink accouterments, and she would not accept regular orders. Instead, you had to give her some image or idea and she would make the drink to fit it. I ordered two drinks that night. They were as follows:

DRINK #1: Flying and skidding across rooftops, like a skipping-stone, across the night city-scape sky, powered by wind and umbrella, kicking up roof tiles along the way.

DRINK #2: A dwarf sits in a graveyard, atop a mausoleum, playing sad, plastic kazoo nocturnes to the love he never had, interred within.

Both drinks tasted spot on. We drank metaphors and we were merry.

On more than one Sunday, I visited the park and the Tamtams. It’s a wonderfully gypsy collection of people organically gathering, drummers and other musicians, vendors, and an assortment of others. They play by the statue and if you wander in the woods you come across folks having medieval battles with foam weapons.

One day, while walking down the street, I came across a very long patio that ran the length of what I thought was an apartment building (but now suspect is some kind of hospital). A woman in a bathrobe marched up and down the patio, very officially. A set of giant headphones connected her to a discman. As she marched, she shook a pair of maracas to the beat of whatever she was listening to. A single boxing glove, decorated with very bright paints and designs, hung from her waist. She stopped me to ask the significance of my T-shirt (it was my I’M A NEIL GAIMAN CHARACTER shirt). I said he is an author. She nodded knowingly. “Spiritual books.” No, I said. He’s a fiction writer. At this she shook her head, realizing there were graver duties to be getting to, and she put back her giant headphones and went back to her maraca marching, the super technicolor boxing glove bouncing at her waste. I wish I’d asked her what she was listening to.

That’s all for today, lambkins. The little hand says it’s time to skedaddle.

I have been in Norway for about a year now, writing dialogue for the Age of Conan computer game. Now, it seems, my pen will take me to Canada as Funcom has offered me a continuing gig at their new game studio in Montreal. I’ll likely start there in August—with a trip home to Chicagoland first.

I have purchased a Molskine Montreal city book.

I’m trying to convince Odin that it’s nothing personal.

I went to a heavy metal bar last night, which seems a fitting thing to do while I’m in Scandinavia. This last sentence doesn’t necessarily fit in with its fellows above, except that it happens to come to mind.

Oliver, a fellow Funcom employee—whom I’ve learned to keep my notepad and pen at the ready around, as he inevitably says things like, “Get away from me with your eyes,” and, “I have a theory that you can brew wine from dead flies,” and, “Don’t bum your dad for an orange!”—has offered to show me around England during my vacation, which I may do for a week, before heading home.

I’ll have pen and pad at the ready.

My Friend Ken: Micro-Biographies Of Genuine Imitation Truth
So, I’ve known Ken since 3rd grade. The older you get, the more important it is to know people who knew you in 3rd grade. Ken made a call for short, humorous bios, to be used while he seeks funding and support and personnel for an independent film he’s piecing together.

I offered the following smorgasbord for him to choose from. I have known Ken for decades and can say that each of these bios is 100% true—they are so true, in point of fact, that each is more true than the last (no matter which order you read them in).

Bio 1
Ken Gallivan was sent back in time to stop Judgement Day—the day hyper-evolved pancakes attain self-awareness and turn on their masters. He can only do  this by making an independent movie. Please, help Ken help you to prevent the Pancake Apocalypse from ever occurring.

Bio 2
Ken Gallivan makes independent films by day, but by night, he fights crime as the Incredible Carlos. His film career funds his gadgets and the preternatural mustache he can only reveal when he sheds his every day disguise—the very mustache that is the line between harmonious order and heinous, criminal anarchy. Please support Ken’s film career. The life you save could be your own.

Bio 3
If you watch just one film made by a dude named Ken Gallivan, this year, make it this one.

Bio 5
Ken Gallivan was created by top Scandinavian geneticists in a secret lab under a mile of ice in Antarctica, in a secret project known only as Black Cabbage. He was designed, honed, and perfected to do only two things: make independent films…and slaughter kittens. Pleas support his film career.

Bio 7
Ken Gallivan is a Time Lord. If he is not able to complete this film, he will be unable to acquire the parts to fix his TARDIS and travel to the past to impregnate your mother, and then you will cease to exist.

Bio 8
Once upon a time, Ken Galivan befriended a savage lion by removing a thorn from the beast’s paw. And if you do not support this film, that lion will fucking eat you.

Bio 9
Ken Galivan is handsome and has a rapist’s wit. Please support this film.

Bio 10
Ken Gallivan is the name of Joy in the hearts and minds of all children. His passing brings peace and the gentle scent of cinnamon. The bears of the north woods call him “forever friend” in their ancient tongue. And though the crocodile lords of the south hate him, dammit, they respect him. Please support this film.

Bio 11
In the time it took you to give blood today, you could have seen Ken Gallivan’s movie. Twice.