That fact has nothing to do with the rest of this post. Books! Specifically, my novel! I recently sold a small box of them I stumbled upon, and they sold fast. In fact some people who contacted me were not able to get one. So, I’m going to do a second round of signed copies of my novel, Strangeness in the Proportion.

You too will smile as big as this happy reader… 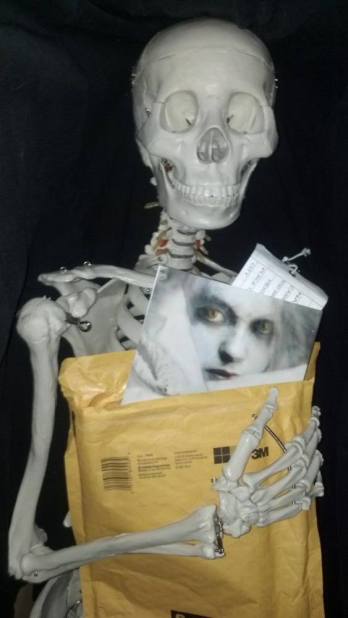 What do you get?

The price (which includes shipping) is $25 to ship to the US and $45 to other countries (sorry, shipping nailed me last round). You can also buy the book cheaper and in electronic format (but sans signature and toe tag) at the link above.

I’ll accept payments through Paypal. If interested, email me at scrivnomancer@gmail.com (that’s not my paypal address, email me first) for details. I’ll get a shipment of the books in October, which means I should be able to have shipped to people before Halloween (a perfect time to read it!).

Want a taste of the novel? This is my short and sweet synopsis:

Want a deeper look? The dynamic duo at The Booked Podcast does a lovely review of it.

UPDATE: My copies of the book are sold out, but more can be bought HERE.

The last few weeks saw a lot of road trippin’. A visit home to my parents’ house turned up a forgotten box of copies of my novel, Strangeness in the Proportion. Behold!

I will be moving soon and must shed the weight of as many earthly possessions as possible. That’s where you come in! I will be taking online orders for copies of the book. $20 will give you the following:

Want a taste of the novel? This is my short and sweet synopsis:

Want a deeper look? The dynamic duo at The Booked Podcast does a lovely review of it.

I’ll accept payments through Paypal. If interested, email me at scrivnomancer@gmail.com (that’s not my paypal address, email me first) for details. First come, first serve. Only a small handful of these.

*And If I already owe you a toe tag, that’s coming soon!

Here are some lovely words that have already been laid down regarding Blood & Smoke from various sources:

“Blood & Smoke is like V:tR and V:tM came together, had a revenant baby and it grew up to be a blood drinking fiend of pure awesome.”
–@AlienStoneDog, Twitter

“I’m so enthralled by this release. There’s this casual, powerful confidence to the writing that continues to wow me and drag me in. Seriously, hats off.”
–Leetsepeak

“Blood and Smoke is clever, sexy, and stylish. The tragedy is still there, in the subtext. But it’s all delivered with smooth smiles, confident strides, celebratory grotesqueness, and blood-stained cool.”
–ArcaneArts, Onyx Path forums

“I really love the energy that the writers put into this. It’s clearly a labor of love that makes reading it a joy.”
–Aiden, OP forums

“That aside, the book is gorgeous. Not just the art (which is fine), but the words are so well done. I’m only 25 pages in and I keep stopping to go ‘Wow, that was a pretty turn of phrase.'”
–BitterOldJoe, RPGnet

“The language and artwork of the book so far has so much flavour with better descriptions and different points of view that it quickens the original EVEN without using the rules. So Bailey and co for the win.

“Interestingly one of my first impressions is that there is a mechanical and narrative shift to night by night play. Not that it dissuades from the longer term but there is so much ‘juice’ in what could happen over several nights that you would hate to miss even one drop!”
–VampDT

“And, overall, the names were correct & rest of the terms properly applied. I think this is a first ever for an RPG book referring to modern Greece. I’m impressed.”
–Yo! Master, RPGnet

“I’ve been reading more. You know what? I’ve been a WoD fan since almost the beginning, and this is the first Vampire game I have seen that works for me. I want to run a game of it. I’m going to try selling my group on it when I see them. I haven’t had that experience before. I’ve pretty much stuck to the other, non-Vampire gamelines.”
–Dionysos, RPGnet

“This book remembers everything I remember about vampires.”
–Tiresias, OP forums

“‘Vampire is about sex and murder’ is a hell of a ballsy way to open a book.”
–Stephen Lea Sheppard, RPGnet

“So I’ve almost read the whole thing now, and, well, it was as I had expected: A masterpiece. Cover to cover a marvelous piece of Darkness.”
–sikker, OP forums

That dripping, noir morsel is from Raymond Chandler’s The Little Sister.

Back in the mid 90s, a sixteen-year-old me opened up Vampire: the Masquerade. I’ve never been the same. That’s the short-hand version. Today, Blood & Smoke: the Strix Chronicle was released. I’ve written for White Wolf (and Onyx Path) before. I wrote a novel, a short story, and a little game writing on the side. But this book is the thing that tickles that teenage fan boy rattling my ribcage.

I wrote the vampire clan chapter and the “All Night Society Chapter.”

This book is an overhaul of the Vampire: the Requiem game. Rose Bailey, the developer, gave the book the most focused and relentless vision of any group creative project I’ve ever worked on. I’m a writer who benefits from an editor who works me. She worked me, and I’m proud of the result.

One of the things that Rose did with the line (and that I felt very comfortable diving into) was dousing it all in Chandleresque noir. And if you need a little foreplay to get in the mood, I have just the thing.

Howzabout a teaser sample, loveling? Here’s a little micro-ficiton for each vampire clan.

Daeva: the ones you die for

He warns you. You’re going to do it anyway. You both know that. Eyes like TV ads that enslave you to debt. Voice like the fast food jingle talking you into suicide by tiny bites. The wanting. Every happiness you already have turns to bile. You smile. “Yes,” you say. “More,” you say. “Anything.”

Gangrel: the ones you can’t kill

Wasn’t the howling. Weren’t the claws or magnesium eyes or the lizard brain keening, “Run, run, run!” Was the change. Like them trashy drive-in horrors, only on rewind. Monstrous bulk shrinking — snout flattening — fangs dulling down to pearls — fur receding to a naked obscenity. The smiling little girl walking towards you on filthy feet. That’s what did it. Ten thousand beasts pressing out on her belly like it’s a theatre curtain on opening night. That’s what emptied your bowels and sanity.

Mekhet: the ones you don’t see

That shit-eating grin. The shit-heel prick. How’d he get into your game? “Not playing the cards; I’m playing you,” he croons. He’s not wearing shades, but you can’t see his eyes. Chuckle. “Always wearing shade,” he says. Did you talk out loud? The fucker is playing the cards, because you just did a bottom deal, a triple lift, and two moves that ain’t got names. You know his hand. He’s already lost. Bastard’s not even looking at his cards. He knows. He doesn’t say, “Fold.” Says something else. Says your secret. The thing no one else knows. The thing you sit up at night praying no one ever finds out. The table flips. Loud noises. Your poker buddies beat you bloody. Through it all, you see his grin. He just fades away, and the last thing floating in the tobacco smoke is that grin.

Nosferatu: the ones you fear

“Shhh.” The voice behind you sounds like a squeezed handful of grave worms. It tells you that it will follow you home. It tells you that if you can make it to your front door, by the long path or the short, without turning around or nary a peep, it won’t kill you. When did you lose your shoes? The pavement turns to tongue meat, tasting your bleeding soles with every step.

Ventrue: the ones you can’t deny

“Let’s make this interesting,” she says. She tells you all the heinous things you are about to do. You laugh in her face. Ridiculous. Then, one by one, all of your limbs betray you. You see everything. You see it all through the socket windows of your Judas body. You try, and fail, to scream through the frozen smile fracturing your face.